Read our review to hear all about our gin experience at the Old Stocks Inn and to find out how you could WIN our giveaway!

Our review has not been influenced by anyone at The Old Stocks Inn or The Cotswold's Distillery.

Wow – what a truly special weekend we had – celebrating our 10th wedding anniversary by checking out the ‘Gin Lovers Experience’ at the stunning Old Stocks Inn located in the picturesque village of Stow-on-the-Wold in the Cotswolds.

The Old Stocks Inn is a 17th century coaching inn which was purchased by Jim Cockell in 2015. At the time, it was a dark and dreary tired B&B. Jim undertook a multi-million pound refurbishment and the team have done a fantastic job, transforming it from a traditional old inn, to a modern and stylish boutique hotel with 16 unique rooms. If you get a chance to visit, make sure you check out the album kept in reception which contains the before and after pictures – it is truly amazing to see the changes.

Stow-on-the-Wold is an old market town packed with antique shops, boutique shops, stunning pubs and endless cafes serving afternoon teas. The original stocks are still in the square right outside the hotel and well worth a look. We spent an enjoyable couple of hours wandering around the town and of course, stopped off for a couple of G&T’s along the way!

On arrival at the hotel, we were greeted by the manager Charlotte and shown to our room, which was room number 10 and one of their ‘Amazing Great rooms’. The room was beautifully decorated with a huge bed complete with woollen blanket and geometric cushions. The bathroom was another 'wow' with the bath of dreams - a roll top with views out onto the walled garden and the rolling Cotswolds countryside. The art work around the hotel on the way to our room was really unique too, featuring lots of amusing signs and interesting pieces.

Being gin obsessives, we of course immediately checked out the mini bar and were excited to see a miniature 6 o’clock gin together with a Double Dutch tonic – as well as other soft drinks and beer. In 2018, The Old Stocks Inn became one of the first hotels in the country to introduce Amazon’s bespoke in-room concierge service, allowing guests to ask Alexa questions about the hotel – such as check out time, what time breakfast is served and what cocktails the bar serves – pretty cool we think! We relaxed in the room for a while, had a long bath using the gorgeous bath oils and later went down to the bar for cocktails.

We met the very knowledgeable barman, Pete, who showed us the impressive cocktail list and made us our first 2 cocktails of the day. Mr Bandit opted for a ‘Vitamin G’ (Campfire Navy Strength Gin, Berocca, Quince, Rhubarb and Mint) and Mrs Bandit chose the ‘Diamond’ (Death’s Door Gin, Champagne and Lemon). Both cocktails were amazing, and it really surprised us to see Berocca being used in a cocktail, we had only ever used it ourselves as a hangover cure – great idea though to cure the hangover before it even hits! The bar has a great sign which says “It’s Never Too Early” which is basically our motto too! The bar had a great selection of gins on offer and a nice range of liqueurs which they serve with Prosecco

Mr Bandit then chose the ‘Cotswold Julep’ (Cotswolds Dry Gin, Pink Grapefruit, Mint & Honey) and Mrs Bandit opted for a vodka cocktail - the ‘Lychee’ (Lychee liqueur, Lychee foam, Lime, Plum & Cardamom Vodka). The Lychee was a winner for Mrs Bandit – even though vodka isn’t usually her first choice. Mr Bandit then tried a rum cocktail called Boddington’s (Gosling Black Seal Rum, Chocolate and Coffee Liqueur). Pete told us he had created this cocktail based on requests from locals and previous regular customers who used to pop into the bar for a pint of Boddington's before the refurb. He created a cocktail which looked exactly like a little half pint of Guinness or Boddington's but fits with the new updated cocktail bar concept. We loved this and the story behind it.

It was then time to sit down for dinner at the 2 AA Rosette awarded restaurant. The restaurant serves modern British cuisine and the kitchen is led by Head Chef Ian Percival. The restaurant was cosy and inviting and we were shown to a nice table by the window, looking out onto the market square where the original stocks still stand. Mrs Bandit chose the Beetroot Pannacotta, Goats Curd and Candied Walnut to start, followed by the Pan Fried Pollock with Tempura Mussels, Caramelised Cauliflower (the only way to eat it from now on!) and Asparagus. Mr Bandit had the Cornish Crab with Watercress Veloute to start, followed by the Beef Sirloin and Beef Cheek main. Every single bite was delicious and just so beautifully presented – the beetroot starter was a work of art and almost too pretty to eat. Mrs Bandit’s diet was well and truly thrown out the window once she saw the cheese board on the dessert menu – selected cheeses from the local Cotswolds Cheese Company including Black Bomber, Baronet, Folden Cross, Wyfe of Bath and Barkham Blue (We stopped off at the shop the next day to buy some cheeses to bring home). 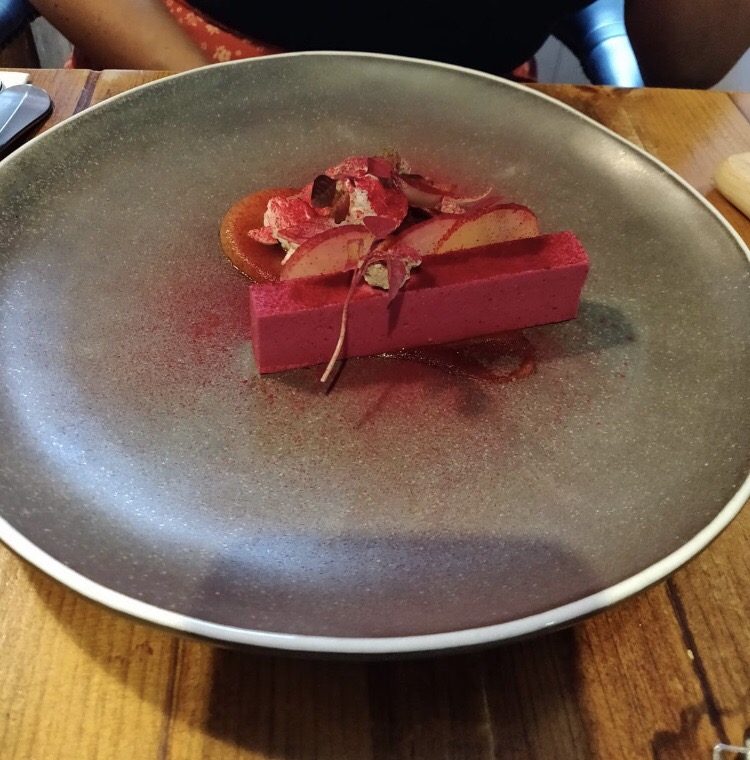 After dinner, we considered working our way further down the cocktail list but decided, for once, to be a bit sensible and instead took some drinks (another Boddington’s) up to our room and prepared for the next morning’s gin tasting at Cotswolds Distillery.

We woke up at 9am, which was an absolute treat for us as the mini bandits normally wake us much earlier, and headed down to breakfast. 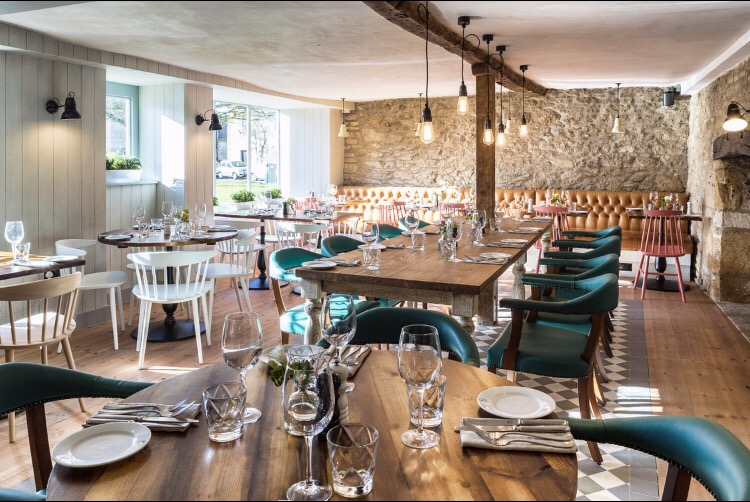 Breakfast was a continental buffet style but you are also given a menu to order from. We chose a few pastries from the buffet and then Mr Bandit went for the full English which included some gorgeous local sausages and black pudding, and Mrs Bandit ordered the Avocado and Poached egg with crispy bacon on sourdough toast – the poached eggs were cooked to perfection and the bacon was outstanding.

After breakfast and with our bellies full, we then drove to the Cotswolds Distillery (Mrs Bandit drew the short straw of being designated driver) which was about 20 minutes away from the hotel. It is a scenic drive down lots of winding country lanes with hardly any traffic on the roads. The tour began at 11am (a great way to start a Monday morning) with a video giving the history of the distillery. We then took a tour guided by Alison, through the distillery showing us the stills and processes used to make their whisky and gin.

The making of Cotswolds Dry Gin - Cotswolds Distillery start their gin making process with a neutral grain spirit (which is supplied by Haymans) and add it to their 500 litre copper pot Lorilee. The three base botanicals - Juniper, Coriander and Angelica Root - are added and left for 15 hours. They then add in the other six botanicals; lavender, black pepper, cardamom, grapefruit peel, lime peel and bay leaves. Cotswolds use around 10 times the amount of botanicals compared to other premium gins as they aim for a strong flavour – for the same reason, they also do not remove the essential oils from the gin before bottling, like other gins would. This is why a Cotswolds G&T is recognised by its cloudy appearance due to the presence of the essential oils. The gin is extracted from the still at 83% ABV and then diluted with filtered water to 46% ABV before bottling. The bottling is all done on site at the distillery and you can see the bottling happening during the tour.

The tour was quite whisky focused as the distillery was set up mainly as a whisky business so if you are also a whisky fan, it is definitely a tour you will be interested in. Cotswolds Distillery are really focused on the area, using local ingredients and employing local people. To make their whisky, they use barley grown by local farmers which is then sent to maltings in Warminster. The malt is then returned to the distillery where it’s mashed and fermented – the fermentation is continued for around 3-4 days and then they begin to distil in a 2,500 litre copper pot still called Mary. The liquid is then moved from Mary into Janis, the 1600 litre spirit still which is where the final spirit is produced and put into barrels. We were also shown into the warehouse where some of their barrels are resting – they used many different types of barrels including STR barrels prepared by Dr Jim Swan.

After the tour, we were taken to the tasting room where we were invited to try any of the products being sold by Cotswolds Distillery, which included around 7-8 gins. Whisky isn’t really our thing so we mostly stuck to the gin tastings. We tried their Old Tom gin, which only comes in 20cl bottles - we are praying that they release this in full sized bottles as it’s amazing - it’s one of the nicest Old Tom’s we have come across. We bought a bottle to bring home but don’t expect to see it sitting on our shelves as 20cl won’t last us long! The other gin that stood out for us was their Ginger Gin - it’s a gin that was already on our wish-list before we planned on visiting the distillery. We first tried it at Junipalooza back in June and it was one of our festival highlights, it’s an amazing gin and we are happy to now have a bottle in our collection. We already have Cotswolds Dry Gin on our shelves, but if you haven’t it’s definitely worth getting a bottle as it’s a wonderful and really recognisable gin.

We had an amazing weekend in the Cotswolds and would highly recommend it as a rural weekend getaway location. The Old Stocks Inn was bright and modern with all the comforts and facilities required, in a great location, being right on the market square and surrounded by interesting shops and pubs. Being just 2.5 hours outside of London, it is definitely somewhere we will be heading back to with friends or maybe even with the kids.

The hotel also has a family room complete with bunk beds and an Xbox, as well as a Cottage that sleeps 8 – perfect for a family break. The Old Stocks Inn also has a coffee shop attached which unfortunately we didn’t have time to check out, but there’s always next time!

The staff at The Old Stocks Inn are all very friendly and knowledgeable about the area and gave us some great ideas for things to do – if you are a keen walker, there are lots of walks and the hotel also has dog friendly rooms so you can treat your 4 legged friend to a weekend away too. There is also a car park tucked away at the back of the hotel so no need to try and park in the busy square.

Now, here’s your chance to spend a couple of days being as spoilt as we were. We have teamed up with The Old Stocks Inn to give away their 'Gin Lovers Experience stay for 2' to one of our lucky followers.

Here’s how to enter:

Which room number did we stay in during our visit to The Old Stocks Inn?

The winner will be picked at random via the likes, and they must be following @theginbandits AND @oldstocksinn. For an extra chance of winning, you can also subscribe to our blog. Winners will be announced on Friday 16th August. T&C apply.

· a signature gin cocktail each

· 3 course meal for 2 in the 2 AA Rosette Restaurant

· And a tour of the Cotswolds Distillery.